How to Replace a Pump - Acrylic Spas Print

The Pump is responsible for moving the water in your Spa and is formed by a wet end (red portion) and a motor (black portion). Our Spas are equipped with a 2HP Balboa Pump for 120V Plug & Play Spas and a Balboa 5HP Pump for 240V models. 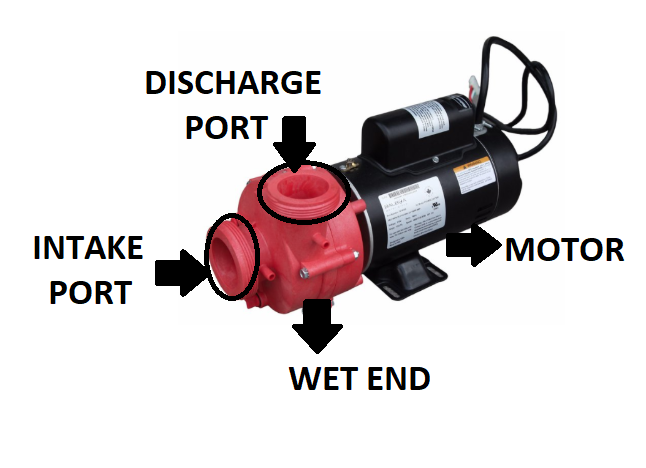 In order to have the Pump for your Hot Tub replaced, please follow the steps below. Please note that this will apply to any size of Pump (2HP or 5HP).

2. To gain access to the actual Pump and to the Control System to where the Pump is connected, proceed to remove all front panels on your Spa. The front side of the Tub is known as the side where the topside is installed. Using a screwdriver, remove the vertical strips that hold the panels in place to release them. 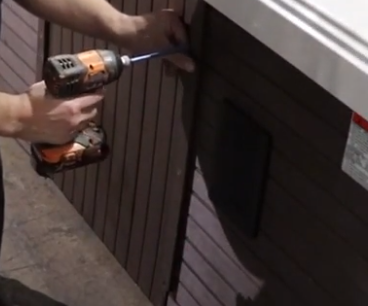 3. Once you have removed all front panels, you should be able to see the Control Pack. Using the screwdriver, remove the cover of the Control System to reveal the wiring.

4. Using the Wiring Diagram printed on the back of the Control Pack's Cover, locate the Pump connector and disconnect it from the Circuit Board. Using your fingers, grab the white connector- squeezing on both the left and right tabs on the side to pull out the plug safely; make sure you do not pull from the wires.

5. Once the connector has been unplugged from the board, proceed to release the cable that is secured to a side of the Control Pack by removing 2 screws. Remove the black plastic piece with the 2 screws on and put it to the side. The pump wire has now been released from the Control System.

6. Using a knife or scissors, safely cut the zip ties that hold the pump wire along with other wires making sure you do not cut the wires. in the process Once released, follow the pump cord all the way to the actual Pump.

7. Locate the Slice Valves installed on both sides of the Pump. There is one Valve between the Control System and the pump (intake port) and another one on top of the Pump (discharge port).

In order to close both valves to stop the flow of water going to and from the Pump, pull out the black plastic tap that keeps the valve in the open position. Then push the valve down making sure you first align the white tab with the slot on the base of the valve and once down, turn it to fully close it. The handle would need to rest parallel with the base of the valve.

8. Once the Slice Valves are fully closed, using your hands proceed to loosen the Intake and discharge ports. When doing this, it is normal to have a little amount of water coming out from the pump/pipes which would be the water that was already in the system before you closed the valves. When both unions are loose, be sure that a white gasket remains inside of each of the pipes that connect to the Pump. These gaskets are crucial to ensure that there is no leaks.

9. Now that the pump has been disconnected from the intake and discharge ports, proceed to remove the 4 screws that holds the pump in place (2 at the front and 2 at the back).

10. Once all 4 screws have been removed, slide the pipes that connect to the Intake Port to gain space and with both hands lift the Pump and rotate it in order to remove it. Before you can completely take the pump out, you would need to disconnect the ground wire connected to the back of the motor. Simply use a flat head screw driver to undo the screw holding the ground wire in place at the back of the pump to remove it.

11. Once you have removed the old Pump, you can proceed to place the replacement Pump in place, following the same procedure just backwards.